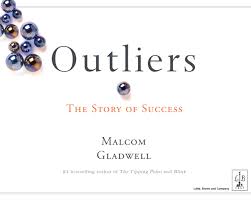 Outliers: The Story of Success by Malcolm Gladwell

In the past decade, Malcolm Gladwell has written three books that have radically changed how we understand our world and ourselves: The Tipping Point, Blink, and Outliers. Regarded by many as the most gifted and influential author and journalist in America today, Gladwell has the rare ability to connect with audiences of tremendously varied interests. There are over 10 million copies of his books in print.

Now, Gladwell’s landmark investigations into the world around us are collected together for the first time. Beautifully repackaged and redesigned, with newly added illustrations throughout each book, COLLECTED is a perfect treasury of prose and provocation for Gladwell fans old and new.

In the vast world of nonfiction writing, Malcolm Gladwell is as close to a singular talent as exists today…Outliers is a pleasure to read and leaves you mulling over its inventive theories for days afterward.
— New York Times Book Review

Oscar_Aguilar
“Hard work and emotional intelligence.
I’ve always been curious about the archetypal “overachieving” type; the person with a 4.0 GPA, supplemented with a vast resume of extracurriculars and seemingly guaranteed placement at some selective, elite institution. They seem to effortlessly master their studies, creating a very bothersome imposition in the back of my mind that made me feel inadequate. For awhile, I felt that there was something innate these certain individuals possessed, hardening my fatalistic perspective about the world and making me question my own self-worth.”

A daily selection of the best content published on WordPress, collected for you by humans who love to read.

The Art and Craft of Blogging

The latest news on WordPress.com and the WordPress community.